Visit our Blog for news about Dominican Center. https://dominicancenter.com/blog/

Because of Dominicans, I am … 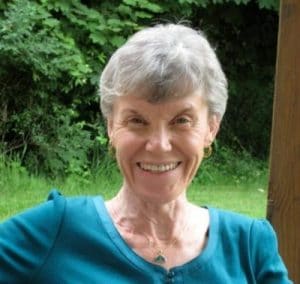 It's an honor to be a part of the ministry of Spiritual Direction, work I never imagined during most of my professional career. I often wake up and wonder anew how I arrived at this wonderful place in my life.

For me, it all began about 20 years ago, as I was reading the Religion section of the Grand Rapids Press. Tucked in between the weekly columns of Rabbi Lewis and Charles Honey was a three-inch square ad inviting me to join a class in Foundations of Spirituality at Dominican Center. Hmm, I thought.

I called my dear friend Mary and convinced her to join me, little knowing that I was turning a huge corner in my life. I’d been raised in a parsonage, had some severe reservations about Catholicism, and had some very tribal notions about how salvation worked — and for whom. I thought my inclination to join the class arose from an intellectual and academic place.

Only later did I realize that accepting this invitation was more heart-driven than head-driven, that an unspoken longing in me was emerging.

Two things happened during the months of the Foundations in Spirituality class. First, the mystics really began to mess with my mind — and then with my heart. Second, one of the requirements of the class was to enter Spiritual Direction, which I had never heard of in my life. I was a little dubious, but being a rule-follower, I signed up, utterly clueless about where that practice would lead. I was assigned to Sister Jude Bloch OP, whom I came to love fervently and gratefully. She was about half my size, but her generosity and directness soon enveloped me.

We spent several sessions talking about beliefs, creeds, doctrines — head stuff — until one afternoon she sat up straight in her chair and said, “OK, Esther, cut the bullsh!t — we’re here to talk about your heart, not your head. What is your heart telling you?” Everything changed in that moment. My heart simultaneously sank in fear and rose in relief. And slowly, slowly, the layers of armor that surrounded my deepest self began to soften. Sister Jude “listened” my soul into a place of disclosure and discovery. That was her greatest gift to me, and one I try to give to my own directees to this day.

Because of Dominicans, I am …